Glorious battles, economic expansion, bold exploration, diplomatic triumphs. There is a lot of fun to be had in VGA Planets. Unfortunately to get to that fun, there is a lot of busy work that needs to be repeated turn after turn. For some players that can lead to turns that last hours, or having to skip crucial, but repetitive tasks.

Fortunately I’m here to tell you that there are a lot of features in-game that can reduce a lot of this busy work. For those willing to try some player made mods, there are even more time saving utilities and features waiting for you that can eliminate whole classes of repetitive work.

In this first part of the series, I want to focus on three different in-game tools that will slash the most time with the least amount of effort. In future articles I will focus on other techniques that will help you with information management, turn planning, and using mods for even more powerful tools to slash turn taking time. Lets take a look!

The #1 most important feature in the interface is also one of the most underutilized: the Ready/Checkbox system on the top of the map when you look at any owned object in game.

Below is a screenshot of the view many players face when looking at a turn. A ton of ships to slog through, but only a dozen or two have anything interesting to do. Not only that- but every time you log in, you have the same list to look through, even if you gave orders to half of them already!

But with proper use of the ready checkbox system, you can turn the same list into a much more manageable number – like I’ve done below.

So how did I do it, and what can the ready/checkbox system do for you?

#1 You can keep track of ships, planets, and starbases you’ve already finished orders for.  Finish orders for a ship? Take the extra split second to click the ready checkbox as I’ve done in the first illustration above. You now know that this ship is done for the turn, and you can skip past it when you see its check mark again.  No more guessing if you’ve given new orders – just look for the check mark.

#2 You can skip even looking at ships, planets, and starbases you’ve already finished orders for.  In between “first” and “Ship” in the screenshots above are a toggle few players even know exists. But it’s the key to using the ready system to improve turn speed. You can flip the list view from All (top) to only Idle (bottom) – a list of only ships, planets, starbases that are not checked, and you haven’t given orders for. Set the interface to show only idle ships, and now you don’t even need to look at ships you’ve given orders to (and checked off)!

Get in the habit of using the idle list instead of all, and you can get a better idea of how many more ships you need to go through as you check them off – and the satisfaction of watching that number drop as you finish orders.

#3 Never look at that fully upgraded planet again (or ship, or starbase)! Sick of looking that that planet that’s never going to change? Its got 10,000 out of 10,000 colonists, and its all maxed out. But every turn you click past it. Why? The ready checkbox system has a third trick up its sleeve for skipping past objects that won’t need your attention for a long time (if ever again). You can click the checkbox twice to bring up a double-checkmark (below)

Double-checkmarked objects will keep in that state until its in a battle, encounters an enemy ship, or a few other situations. Use it for planets that you’re done upgrading, starbases that have their builds set, or ships on long term missions (terraformers, Hiss, etc).

Automate Building Structures on Planets and stop clicking over and over to build factories and mines!

One of the most important aspects of VGA Planets is the development and exploitation of the many planets of your budding empire. It can also be one of the most time intensive aspects of the game, and many players abandon planet development or throw up their hands at the repetitive and mindless maintenance of mines, factories, and defense posts in the mid to late game.

This is also one of the most easily avoidable parts of VGA Planets thanks to the Autobuild feature in the planets.nu client. Open up any of your planets and take a look at the structure building screen (where you build factories, mines, and defense posts). 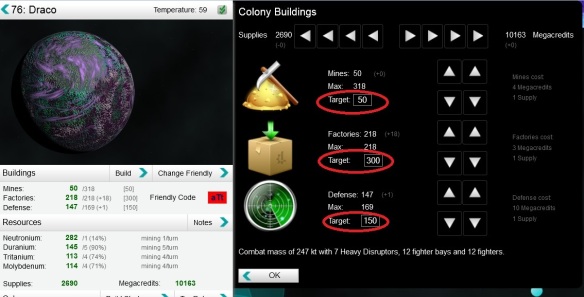 See the circled areas? Enter in a number there and planets.nu will automatically build as many defense posts, factories, and mines as it can to meet that number. This is a great tool for a planet that for the most part is developed, and you want to make sure that factories (or mines, or defense posts) are maxed out. Enter in a number in the text field, double check the planet so you can stop checking in on it, and you’re done!

This is an invaluable tool in the mid-to-late game, and when combined with the checkbox system can mean that a vast majority of your planets can be skipped.

A few words of caution – the build order seems to run Defense, Factories, then Mines – but not always. For early planet development I still recommend updating by hand, or by only setting factory and mine targets that are attainable in a few turns. Finally – in VGA Planets more is not always better. Maxing out mines makes little sense when a planet will be finally mined in a few turns – better to set the number of mines to a number that balances production and how long it will take to fully mine the planets interior. I often set planets to autobuild to only 50 to 100 mines when they possess a middling amount of minerals (less than a thousand).

Set Waypoints – Plan Ahead, Make Your Moves Once, and Save Time!

Most players set their ship moves one at a time, turn after turn. Which is fine, but if you have a plan for a ship, why not set all its movements all at once, instead of hoping you’ll remember your grand plan turn after turn?

Movement waypoints is a powerful system that is hidden in the main interface. For the last part of this article, I want to focus on this underutilized system. Movement waypoints give the ability to set a ships movements not just for this turn – but for future turns as well! To set a waypoint instead of clicking  on your ships destination as you normally would do, hold down the SHIFT key and click the mouse.  Want to set another waypoint? Hold down SHIFT on your keyboard and click again. The ship will move through the waypoints sequentially each turn. So if you set 3 waypoints, it will go to waypoint 1 this turn, waypoint 2 the next turn, and waypoint 3 the turn after that (sorry – can’t go to multiple waypoints in a single turn). 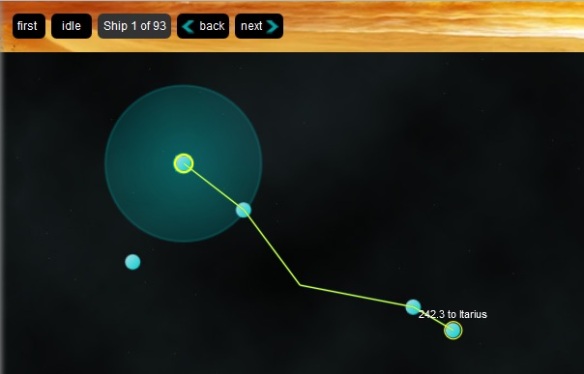 A ship with multiple waypoints set.

How does this save you time? In multiple ways! Lets take a look:

#1 You set the ships movement once, so you don’t have to go back and enter in new movements each turn. Once set, the waypoints remain until all movement is complete – so a ship on a long distance journey can still have a complex set of movements (point to point, to hide your destination and starting location), and you can just skip past the ship until it arrives

#2 It’s a visual reminder of what you were planning on doing with a ship. It’s a common problem when you are juggling a lot of games (and a lot of ships), often with big breaks between turns. I moved this freighter to Planet X. Why? Where was it going? Use the waypoint system as a visual reminder so you can see what you were planning for the ship (ah yes, going to Terra) – and save time by not sitting around playing memory games.

#3 Waypoints set will keep running, even if you don’t submit a turn. Not a time saver per-se, but if there is a risk that you won’t have time to devote fully to a turn – or may skip taking it entirely, then setting a movement waypoint guarantees that your ships planned movement will complete.

In Future Installments of VGA Turns in 30 Minutes or Less: Time saving missions and friendly codes, information is time saving – using the data management features of Planets.nu to make decisions quicker,  the power of mods to slash time from your turns.

Suggestions for future additions are welcome – help me make this series as good as it can be!